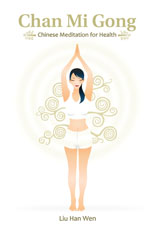 This step-by-step manual includes illustration and instructions for learning this simple, but powerful type of qigong.

Included is a brief historical background of the development of Chan Mi Gong from a combination of the Chan (Zen) and Mi (Tantric) sects of Buddhism.

What others are saying about Chan Mi Gong

Author Liu Han Wen
Liu, Han Wen comes from a distinguished family of practicing Buddhists and medical doctors. He learned various types of mediation and qigong at home as a child. He synthesized his learning into a system of exercises he named Chan Mi Gong.
He first taught Chan Mi Gong in the 1950's at the Shenyang Sports Clinic in Liaoning Province, China and continued teaching in the 1960's at the Dandong Sports Clinic. In 1980, Mr. Liu taught Chan Mi Gong in Beijing. Since then Chan Mi Gong has spread throughout China and parts of the world.