Legend of Mu Lan: A Heroine of Ancient China 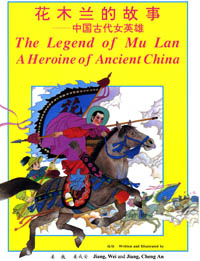 In ancient, war-torn China, hundreds and hundreds of men were called upon to defend their homeland. Unknown to all, there stood one female among the soldiers. Disguised as her brother, in order to take her father's place in the army, heroine Mu Lan bravely defends her country with superior martial arts.

Cheng An Jiang and Wei Jiang are an award winning father/daughter team of authors and illustrators who have published between them over one hundred children's books. They have remade the classic Chinese poem of Mu Lan into an easy-to-read, vibrantly colored picture book.

The Legend of Mu Lan - The first English language picture book of Mulan published in the United States.
Read More..

Mu Lan lesson plans - A look at the historical Mulan with links to a variety of sites, including one that shows you the poem written in Chinese. Read More..

Mulan : Rise of a Warrior (2009) Live action legend of Mulan in Chinese with English subtitles 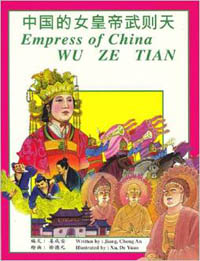 A beautiful young nun with skin as smooth as silk and a face as lovely as a spring flower silently cooked and cleaned all day at Gan Ye Buddhist Temple. Every evening she joined the other nuns in chanting sutras.

Who would believe that this delicate young nun was destined to become Emperor of China - the only female emperor in more than 5,000 years of Chinese history.

Wu Ze Tian held power for almost half a century during the Tang Dynasty (618- 907 AD), a period of prospertiy and cultural achievement in China.

For more information on heroines, visit Heroines in History.