The Legend of Mu Lan: A Heroine of Ancient China 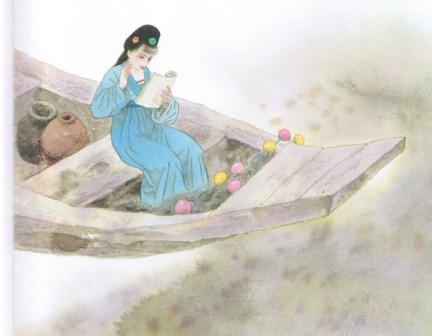 Eileen Hu dreamed of writing books with multi-cultural heroines since she was a little girl. Her mother often told her the legend of Mu Lan as a bedtime story.

In a similar situation, Eileen worked to see her ill father’s manuscript published. She started Victory Press. His work on Zen became a success before his death. In 1992, she met Jiang, Cheng An and Jiang, Wei in Beijing, China, and together they produced an historically accurate version of the legend of Mu Lan which dates from China’s Song Dynasty (AD 960-1279) and is told in the 900 AD poem Mulan Ci.

The book conveys strong messages: allowing children to excel at their natural interest regardless of gender; patriotism and respect for one’s elders; family obligation; breaking down stereotypes and women’s effectiveness in the martial arts and the military.

It was cited as the year's best translation of a tradition piece of literature by the Multicultural Publishers and Education Council.

More information is available at www.HeroinesInHistory.com.

For Eileen, producing the book has special meaning. "It’s passing on traditions." And she said, doing it in English and bilingual with Spanish, Vietnamese and French will reach beyond Chinese culture so that children not necessarily of Asian descent will learn.

She and others acknowledge the inaccuracy of the Disney version.

"I would say one of the main things they didn't capture was Mu Lan herself and the reason she is so popular. She represents strength and bravery by herself. She didn’t need a boyfriend to help her with that. The other thing, the traditional story is one of filial piety. She doesn’t run away from home." While Disney may have produced a more popular version, they take away from the original, traditional story, she said.

"When I was growing up, when I was a child, my mother would tell me the story. The most important thing she would emphasize is that you can do what you set your mind to. Even if you must disguise it, if society does not accept it, you can still get it done."

The publisher does hope to expand in relating stories of other cultures. Since she has access to Asian experts for now she will work within that arena. One goal is to take popular children’s stories from different parts of the world which represent core values and translate them to many languages. She does not just want stories with fairy tale endings, but ones that really represent the values of society to translate back to Chinese. Children there have little knowledge of Mexican or African tales, for instance, she said.

For now though, she will continue Chinese stories of female heroines. Currently, she is developing one about China’s most famous mother.

At almost 70 her own mother is still teaching, working with mainly with immigrant children in Monterey County, California. “One of her strengths Is working with youngsters, pushing them to be all they can be,” said her most notable success.

Ask Around
Are there heroes or legends in your family history? Ask your parents or grandparents for family stories that might help you identify a family hero. Perhaps someone excelled as a soldier, writer, office-holder or founder of a community.
Check local history at the library or look up your family name in property or tax records at the courthouse. Perhaps visit a cemetery where family members are buried. Study makers for names which may have connection to your family. Research the lives of those people.
Write your own legend. Make up an ancestor who did great deeds and write a story about the effects of their efforts.